Ask around – everyone has an opinion about their email and their inbox, and it’s not always positive.

From information overload, zero inbox and leaked email scandals to the much-hyped triumph of workflow software like Slack and Asana, email has certainly had a bad rap recently.

Email has been with us for about 45 years, since the first such electronic message was sent in 1971. The death of email was first predicted in 1989. Back then, it was the fax that apparently signalled its ultimate end. Yet despite stories of its demise, virtually every internet user has an email account and 38 per cent have three or more. (And how many people use a fax machine these days?)

But how much do we know about how Australians use email? Do people send personal emails from work? Do they use encryption?

National survey on email use

Last year, Swinburne University launched the first national survey of 1000 people about their email use.

Although previous studies have explored it as part of a suite of other communication technologies, we delved deeper into people’s specific email practices, habits and attitudes.

Far from being in its death throes, what we found is that email dominates the workplace and, perhaps surprisingly, still rates against social media as a platform for personal communication. 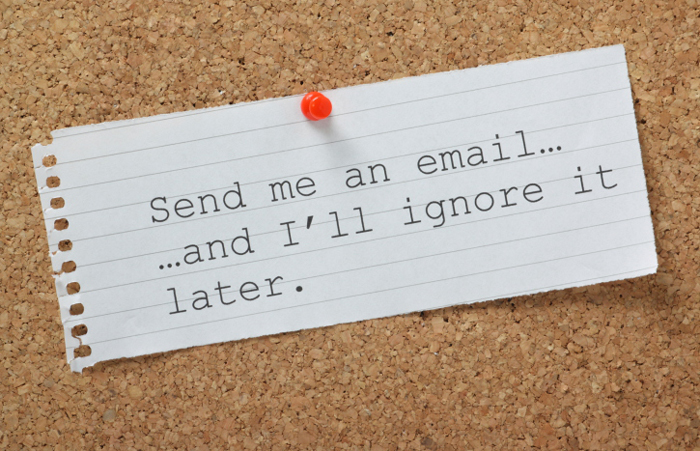 Email continues to defy predictions of its demise, according to research. Photo: Getty Images/iStockphoto

Our survey included questions about how often people checked email, what devices and software they used and how they managed their work and social email accounts.

What we learned is that people distinguish between email for work and for private or personal use. Eight in 10 of employed Australians generally have separate accounts for work and personal use. Despite this, nearly four in 10 people said they do send some personal emails from their work account.

Nearly a half of those in the workforce check their email every hour or more often while a further 45 per cent check several times a day.

Email and face-to-face talking are in close competition as the most frequently used mode of communication at work, with 84.1 per cent using email “often or quite often” compared to 85.6 per cent for face-to-face.

The corresponding figure for the up and coming internal social network programs such as Slack, Yammer or Asana is 12.5 per cent, which has yet to get to the level of fax (16.2 per cent). A quarter of workers use social media “often or quite often” to communicate at work while the phone remains popular at 78.7 per cent.

Email is alive and kicking

Figures like these certainly challenge the prevailing, and by now decades old, death of email narrative. Just three in 10 respondents agreed that email had been replaced by social media, and fewer than one in five workers said they used email less often than they did five years ago.

But what are people saying in these emails? And what do they think about their workplace having the right to access their email account?

In our survey, 56 per cent of people felt their employer should not have the right to access their email accounts. Others, however, thought it was justifiable for employers to have email access if “suspicious activity” was detected, or if employees were “taking advantage of work time”.

Somewhat chillingly, one IT manager revealed their particular position gave them a “vast amount of access” to workplace emails, a privilege they fully exercised.

Rationalising the action in terms of job security, the respondent said:

I have abused my administrative powers to access email to find out what is planned for me.

This manager was not alone. In answer to the question “Have you ever read someone’s email without their knowledge?” Eighteen per cent confessed they had taken a peek with occupational position high on the list of explanations.

One temporary administrative support worker admitted to having “looked at the personal emails of the girl I was replacing” because there was not enough work to do in the temp role.

Reading other people’s emails also happens accidentally. In the post-Snowden world, it turns out that the humble printer room is actually rife with clandestine activity as a number of people reported picking up and reading emails not intended for them.

Given all these opportunities for exposure, it’s surprising more people aren’t actively protecting their accounts. While 41.3 per cent of respondents felt concerned about email privacy and security only 13 per cent used encryption software.

But it’s not all about workplace surveillance. Email is still a key method to keep in touch with friends and family with 66 per cent using it for this purpose and nearly a half sharing photographs via email.

Overall, our research found that email may be boring, it may have been with us for a long time and it may not have a 30-something billionaire proprietor to provide narrative interest but there is no evidence that it is going away anytime soon.

Perhaps like many mature technologies, it has been so integrated into people’s lives that it barely registers as a “thing” at all.

The work trends creating the offices of the future

Sydney's Strathfield Hotel for sale after 100 years of ownership

Investors fuel up on service stations at auctions

The spaces industrial investors are seeking out

Five ways for businesses to reduce expenses and improve efficiency