Skip to content.Call Support 1300 799 109
Domain Allhomes
Commercial Real Estate
Everything a Barangaroo worker need has been positioned within a three-minute walk of their building in a world-first concept. Photo: Supplied
Sue Williams Apr 16, 2019
facebook
twitter
linkedIn

The new Sydney suburb of Barangaroo is pioneering a world-first “three-minute worker” model that its developers hope will be picked up around the globe.

With 10,000 people now having moved into the first two of the three massive commercial towers at Barangaroo South, the blueprint for the model of workers having everything they need within a three-minute walk of their buildings is now undergoing its biggest test to date. 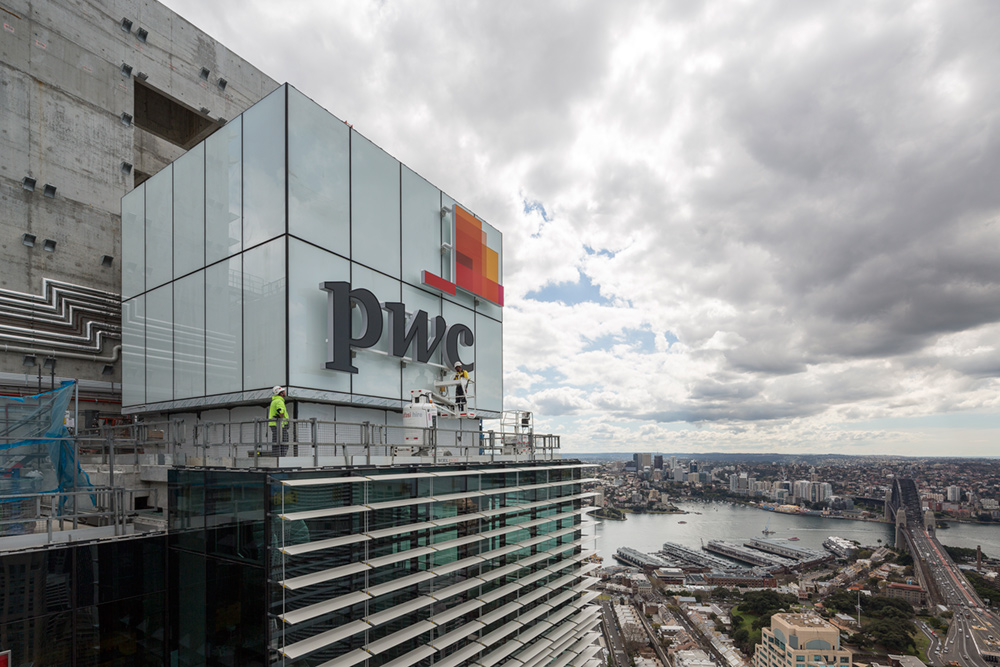 “And it seems to be going extremely well,” says Andrew Wilson, managing director of Barangaroo South for developers Lendlease.

“The feedback we’re getting from everyone – staff and people like the doctor at the medical centre alike – is very positive.

“We’re now getting a lot of international visitors coming to see it as well as other Australian developers, and we are hoping this is a model that will be reproduced elsewhere in Australia and around the world.”

A quick trip to the chemist at Barangaroo is the reality. Photo: Supplied

Eventually, the Barangaroo precinct will be host to around 23,000 office workers and 2500 residents, which will give it a larger day-time population than other inner-city suburbs like Surry Hills.

The plan has always been that the workers at International Towers Sydney would have every facility they need at their fingertips.

On the completion of the area, on the north-western edge of the CBD, there will be more than 80 new stores, cafes, restaurants and services including a medical centre, optometrist, dentist, pharmacy, hairdressers, newsagency, banks, gyms, childcare centre, dry cleaner and a David Jones outlet.

Research carried out among incoming tenants found that the highest ranked priority was having a doctor’s surgery close to the office – 65 per cent – with others including a gym, yoga studio, good coffee and a dentist. 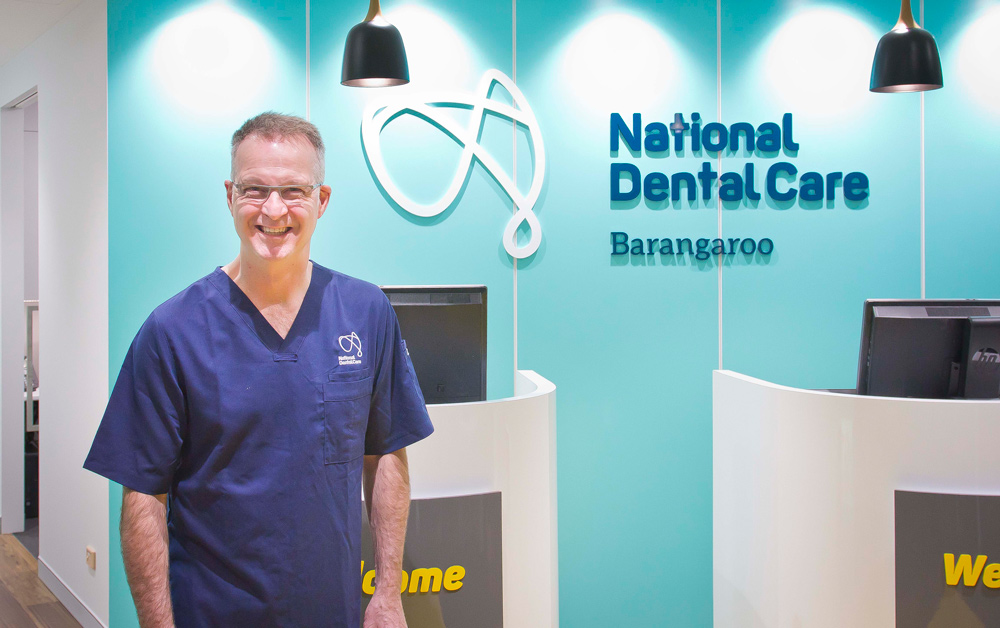 “We were surprised that the doctor ranked higher than coffee shops but that was probably reflecting the frustration people feel when they have to travel to find a doctor,” Wilson says.

“What we’re trying to do is create the biggest collection of medical services outside Macquarie Street in the CBD.

“The other day, I walked from my office to see the doctor, then went next door for a scan, then over to the pharmacy with my prescription and was back at my desk, all within 30 minutes.” 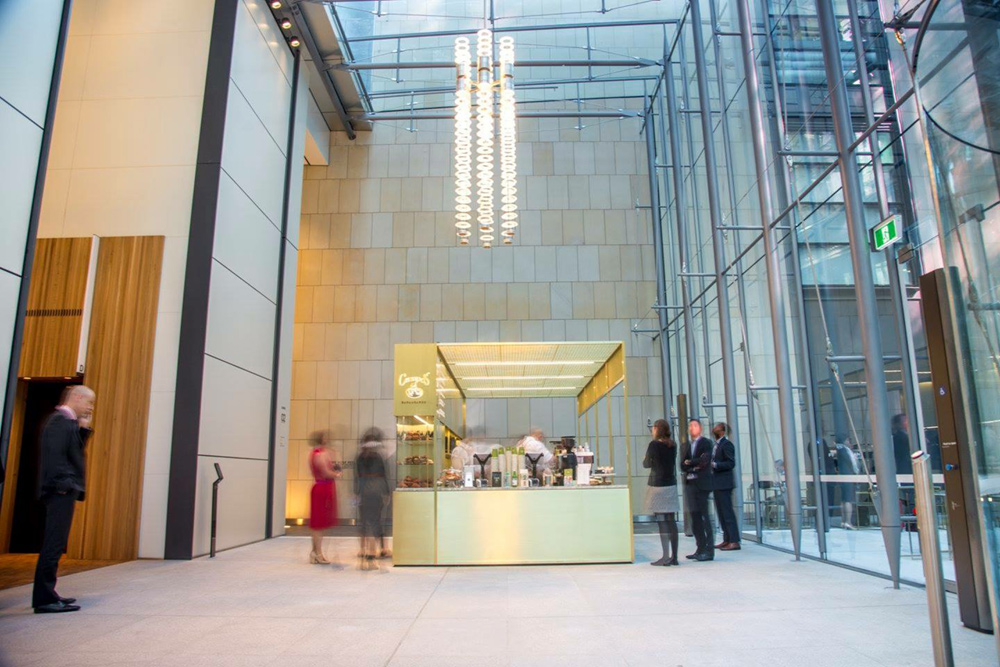 Coffee is close by thanks to Campos. Photo: Supplied

Barangaroo’s three-minute worker program has also been praised by the Committee for Sydney.

Head of strategy Eamon Waterford says he thinks the provision of such a lot of much-needed commercial space together with all the time and convenience advantages of density should be applauded.

“I think those elements are really great,” he says. “Lifestyles are changing, and it’s no longer enough to simply have blocks of time for work, for home, for play and for sleep. People are demanding more flexibility than that.

“They want to be able to pop into a bank in a lunch break and be able to pick up shopping in the afternoon rather than at the end of a busy day.

“People increasingly expect those things from their workplace, and the idea of a city having so many mixed uses and opportunities can only make it richer.”

News Essentials at Barangaroo is one of the new stores offering convenience to staff in the new precinct. Photo: Supplied

With Westpac, Gilbert & Tobin and Swiss Re already in Tower Two, and KPMG and Lendlease in Tower Three, Tower One will be completed by the end of the year with HSBC, Marsh & McLennan, Servcorp and PwC as tenants.

The three-minute worker model means they’ll all be participating in what the future of work will look like, Urban Development Institute of Australia NSW CEO Stephen Albin believes.

“It’s a fantastic thing, and a good indication of where our cities will be going in the future,” he says.

“Lendlease have always been pioneers in terms of development. This is a masterstroke.

“Companies will get the best workers as people will want to work at Barangaroo, they’ll be prepared to pay higher rents for the office space and Sydney as a city benefits too from happier workers.

“This is leading-edge development and versions of this will roll out across the world.”

The next big opening at Barangaroo will be its Wynyard Walk in a fortnight, an underground tunnel connecting the precinct with Wynyard Station. The ferry hub there is currently under construction, due to start operating early next year.

In 2018, the NSW Government is expected to start work on a new metro station for the area.

Underneath Barangaroo there are more than 1000 bike racks as well as showers and a concierge who provides towels and water.

Ever dreamt of owning a country pub? This Tasmanian gem could be just what you were waiting for

5 tips for a successful office fitout