Commercial property owner George Michalis said the Cosmopolitan Centre building his family owns in Woden could be a chance of beating other, younger neighbours – even though it is 30 years old

About 5500 square metres of the 8000-square-metre Cosmopolitan Centre building has been empty for seven years, ever since Centrelink moved staff to Tuggeranong.

“We think it’s actually quite beautiful inside,” Mr Michalis said. 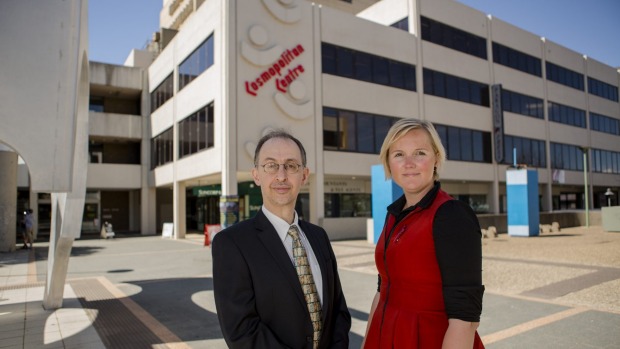 Purdon Planning chief executive Kristi Jorgensen, and George Michalis, director of Michalis Holdings in front of the Cosmopolitan Centre, which may be used as office space for 1100 ACT government staff. Photo: Jamila Toderas

The competition to house the incoming public servants was expected to be fierce with many tens of thousands of square metres of empty office space in the town centre.

The territory government’s influx of 1100 Health Directorate and Access Canberra workers would need 15,500 square metres of space. And that could easily be found.

The Alexander and Albemarle buildings have sat vacant for years awaiting demolition.

As of the middle of this year much of Penrhyn House sat empty, despite a $10 million upgrade, although its current vacancy rate is not known.

And Lovett Tower, Canberra’s tallest building, has been mooted as a possible aged-care facility after losing its public service tenants.

Mr Michalis and planner Kristi Jorgensen, chief executive at Purdon Planning, have both called for the incoming public servants to be placed in offices close to the Woden plaza, such as the Cosmopolitan Centre and Lovett Tower.

They argued this would be the best way to reinvigorate Woden.

“Each could be successfully refurbished to adhere to the government’s requirement for good quality office accommodation and its wish to reinvigorate the plaza,” Mr Michalis said.

Ms Jorgensen said the original master plans for the Woden town centre prepared by the National Capital Development Commission in the 1960s focused development on the plaza.

“The concept reflected the central plazas of European cities, which are the focus of community and commercial life,” she said.

“While most Canberrans assume the ‘plaza’ refers to the Westfield shopping centre, it is in fact what we know as the Woden centre.

“Concentrating office workers around this focal point would not only realise original planning concepts for the centre, but would reinforce the objectives of the newly released Woden town centre master plan,” she said.

The major redevelopment of Adelaide's number one foodie destination

'So much hype': Why sites like this have proven resilient in a pandemic

Should you sit at work - or stand?